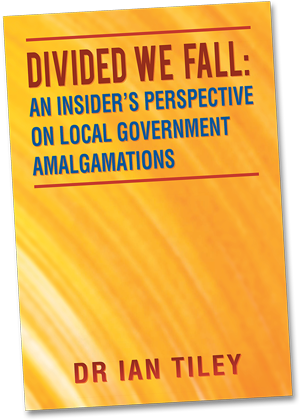 Recent Australian local government structural reform has manifested as council amalgamations and predominantly as imposed merger processes. Divided We Fall? An Insider's Perspective on Local Government Amalgamations, is Ian Tiley's expert textual guide to the complexities of Australian local governance. It is clear and concise, making it an invaluable easy to read tool.

The book examines council amalgamations across Australia since 1992, with a case study of the 2004 council amalgamation that became the NSW Clarence Valley Council. The imposed amalgamation of four general-purpose and two county councils could have been a recipe for chaos; instead this book describes the gains and the challenges.

Written from the author's deep-seated knowledge of local government, the book details the net positive economic outcomes and financial benefits against measurable indicators and describes the impacts on local democracy. Based on detailed research, this long term local government 'insider' perspective of the Australian model is of value to those interested in driving or understanding change through local government reform.

Purchase the book online at www.xlibris.com.au or www.amazon.com or www.barnesandnobile.com or call 1800 618 969

See the author's current CV on the About page

This book is available online through booktopia.com.au and other book sellers